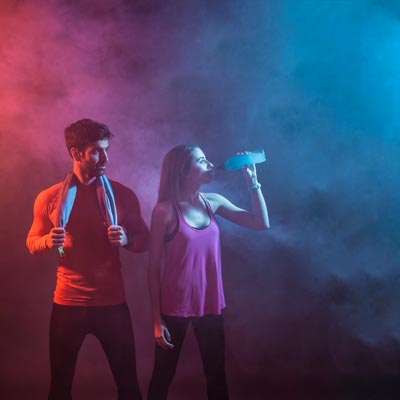 Energy Drinks Among Kids And Teens

Energy drinks among kids have raise new concerns, as the emergence of new caffeine products have hit the market, enticing kids and teens to walk the fine line of having a mood boost and overdosing on caffeine. We still know little about the impact that energy drinks have on kids, mainly because energy drinks are relatively new and there haven’t been many long-term studies completed. A 2011 study conducted by the University of Miami reported some disturbing finds, however. Energy drinks may do more than just make kids jittery; they may significantly harm the health of kids, especially those who have diabetes, mood disorders or cardiac abnormalities.

The Emergence of Energy Drinks on the Market

Did you know that energy drinks are the fastest growing beverage on the U.S. market? More than half of the market is under the age of 25, and nearly half of teens and college students consume energy drinks. That’s exactly why energy drinks are marketed to the younger crowd; they choose fun, brightly colored labels and fun logos that attract the younger generation. And it’s not just teens consuming energy drinks but also kids in elementary school.

Energy drink overdoses have been reported in the U.S. and other countries, and there have been cases of kids younger than 5-years-old overdosing on these beverages. This is a real problem with real consequences. Also consider that energy drinks are made for adults, so they don’t take into consideration that the amount of caffeine in them can have harmful effects on a young body.

If the surfacing of energy drinks in school and sports teams isn’t bad enough, there is another underlying problem that energy drink usage is creating, and that’s the start of addictive behavior at a young age. Kids and teens consume energy drinks for a variety of reasons; more energy in school or sports, to feel the buzz from caffeine and to fit in with the crowd. These are the same types of reasons why teens turn to drugs and the pattern of addiction begins. Since caffeine is a drug, kids are stimulating the pleasure centers in the brain, the brain produces higher amounts of dopamine and then the brain must work to return to its normal levels. This is what happens in an addict’s brain, and this is what’s happening in the kid’s brains when they start consuming energy drinks.

Furthermore, a new product has surfaced; energy drinks with alcohol. It has been a belief that if you combine energy drinks with alcohol, you can skip over the sleepy, sedative effects that alcohol has and enjoy a mood boost and a buzz. People have been doing this for years, such as when drinking Red Bull & Vodka. Obviously, this concept is false, but manufacturers have preyed on the minds of kids and teens, creating drinks like Four Loko that contain both caffeine and alcohol. These drinks have resulted in several deaths, calling into question their safety. Four Loko was banned in several states and is no longer marketed as an energy drink. This practice still exists however, and if kids are exposed to energy drinks at a young age, it won’t seem any more dangerous to have an energy drink that contains alcohol.

A final point to consider is that kids with underlying problems such as mood disorders or ADHD are more at risk for having serious effects from energy drinks. The medications that these kids take can have adverse side effects when mixed with caffeine, so parents must be aware of what their kids are putting into their bodies.

Recognizing Caffeine as a Drug

At The River Source, we like to educate parents and caregivers on the behaviors that are common among teens and young adults. So many of our families say, “I can’t believe this happened to our family. I would have never expected it from my child.” It’s always difficult to see the pain and strong emotions that surround a loved one from struggling with addiction, and the scary part is that for many of these families, their loved one’s addiction started with something simple; a prescription pain pill or energy drink habit for example.

At this time, there are no recommendations on energy drinks for kids and teens because we know so little. It’s best to stay away from them completely, which is why some drinks cannot be sold to anyone under the age of 19. Even if one drink sounds harmless, it’s best to deter your child from drinking one. This behavior can turn into a harmful cycle and lead to abusing other drugs in order to pleasure the brain.