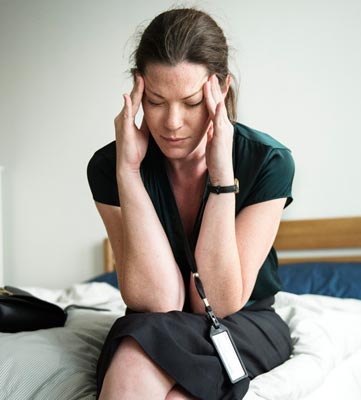 The Relationship between Mood Disorders and Substance Abuse

It’s no secret that there is a strong relationship between mood disorders and drug abuse. Even so, that doesn’t mean that one causes the other, even if only one problem showed up first. There are a variety of factors that affect the dynamics of this relationship, and it’s important that all aspects of mood disorders and drug abuse are understood in order to best serve recovering addicts.

The River Source works with many patients who have underlying mental disorders that have made them vulnerable to drug addiction. That’s why we believe in treating the whole person – mind, body, and spirit – in order to reach full healing. By addressing mental and spiritual health, we can help our patients find treatment for mood disorders that may be at the root of the problem.

How Mood Disorders and Mental Illness Impact Each Other

Let’s review the different scenarios that occur for many of our drug addicts who also suffer from mental disorders.

Drugs Cause Symptoms of Mental Illness.

For many River Source patients, it was simply curiosity at a young age that got them started down the path of addiction. Consider this example. Jane is an impressionable 13-year-old who is aware that some of her friends have tried drugs. She finds a bottle of prescription painkillers at her grandmother’s home from previous surgery. She takes the painkillers, shares them with friends and saves a few for herself. It doesn’t take long for her to become addicted, and she reaches out to others her age that has been abusing the same drugs.

Over the next several years, Jane moves her habit from painkillers to heroin, which is cheaper and easier to get. She also drinks and smokes marijuana daily. The effects of these drugs have caused Jane to experience symptoms of mental illness, such as depression, irritability, and anxiousness. Jane is so severely addicted to drugs, she has a difficult time controlling her emotions.

As we work with patients to uncover the underlying reasons for why addiction has occurred, we often find that many of our patients long suffered from symptoms of mental illness. Until the mental illness is treated, the drug abuser may not be able to stop using, such as the case with a man named Jimmy.

As a child, Jimmy had low self-esteem. His parents were divorced, and he didn’t receive the support he felt he deserved. As a teenager, Jimmy starts hanging out with a rebellious group of kids, and while he knows they aren’t the best choice, they give him the acceptance he craves. Still, Jimmy lacks confidence and starts using drugs along with his friends for fear they won’t accept him. He instantly enjoys the effects of these drugs and alcohol since they self-medicate him, ease his problems and give him more confidence. Jimmy soon doesn’t care what happens to him; he would rather die than have to live without the peace that the drugs and alcohol provide to him.

Mood Disorders and Drug Use Have Overlapping Triggers.

Sometimes, it’s not one factor leading to another. It is believed that for some patients, it may be overlapping factors that lead to both mood disorders and drug addiction.  Some causes for this may be brain deficits, genetic vulnerabilities or exposure to stress or trauma. The example of Kara shows this relationship at work.

Kara was a fun-loving child with a good head on her shoulders. When she was just 15-years-old, Kara and her parents were in a fatal car accident; Kara’s parents died, leaving Kara behind. Although she recovered with no lasting impairments, Kara couldn’t help but relive the accident and her traumatic loss. At the same time, she begins experiencing symptoms of mental illness, such as depression, anxiety, and post-traumatic stress disorder. She also begins using drugs to medicate herself. Although Kara was perfectly healthy before the accident, the stress of the event led her to experience mental illness and drug addiction.

A Look at the Statistics

No matter how the problem manifests itself, the truth is that mood disorders and drug abuse go hand in hand. A 2008 study published in the Archives of General Psychology reported that people who suffer from manic depressive symptoms are at significant risk for developing a drug or alcohol addiction. Approximately 40 percent of people with alcohol addictions have symptoms of a psychiatric disorder, while nearly 50 percent of people with drug addictions suffer from mood disorders.

Just because you or a loved one has an underlying mood disorder doesn’t mean you have fewer chances for success. When seeking treatment at The River Source, we treat all aspects of the person, so you can expect a complete recovery. To learn more, speak to a The River Source representative at 888-549-3510.