The Link Between Substance Abuse & Suicide in Young Men

Death by suicide is a public health crisis in the United States, with the Centers for Disease Control and Prevention (CDC) reporting that the nation’s suicide rate increased 33% between 1999 and 2017 [1].

Even more alarming is the number of young men who die by suicide each year. Suicide is the second leading cause of death for 15-24 year-old Americans, with males accounting for 79% of all suicides [2].

These statistics are staggering, and there’s no simple path to reversing them. At The River Source, we take great pride in our community and our ability to incite change, but we can’t do it alone.

In Arizona, on average, one person dies by suicide every seven hours, with the state ranking 20th nationally in suicides. 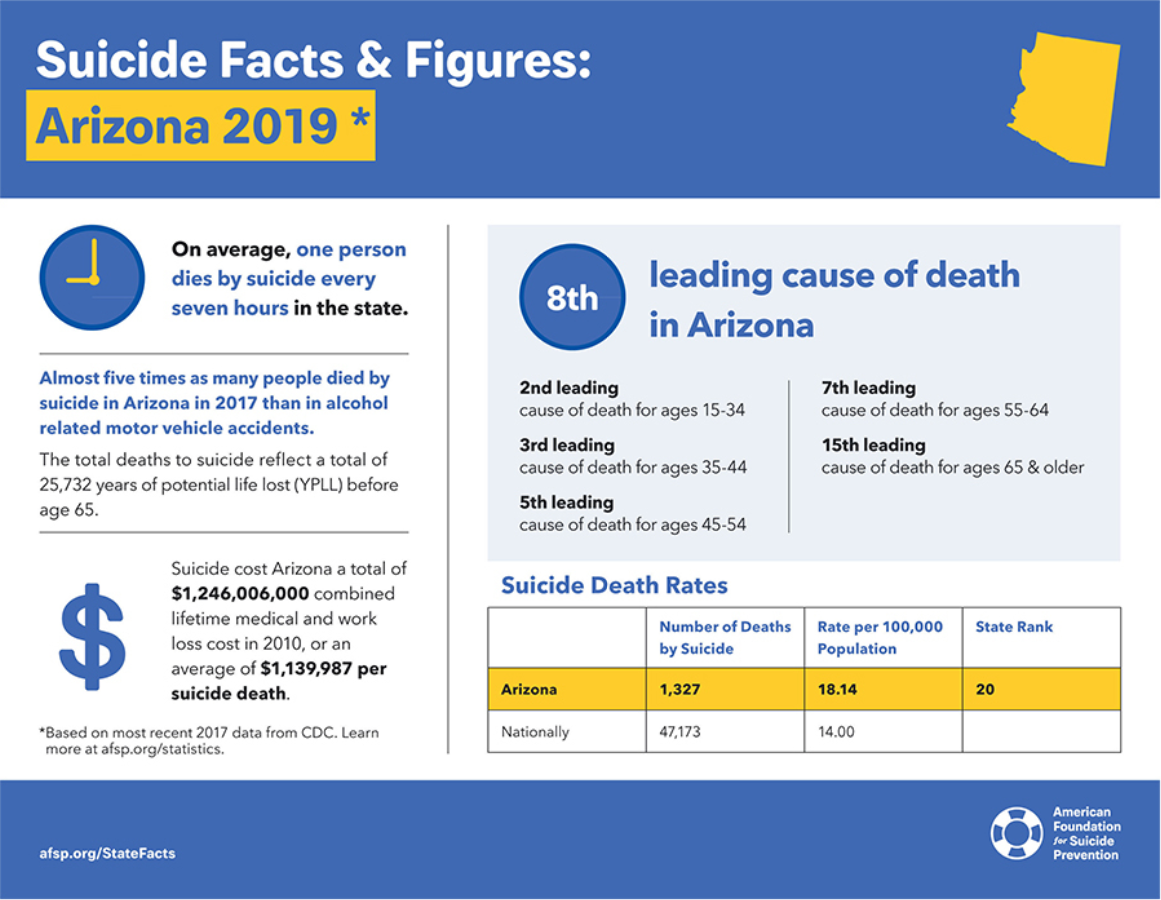 In order to truly address this problem and find effective solutions, we first have to understand the underlying causes.

Mental illness has been stigmatized throughout history, and unfortunately, many parts of this culture remain in place today.

Some falsely believe that all mental illness is linked with insanity or violence, or that it’s a sign of an embarrassing, shameful weakness that should be concealed. While the stigmas surrounding mental illness are based on antiquated beliefs, the persistence of these negative — and dangerous — trends in society can cause those who are suffering from mental illness to resist asking for help.

While the perception is that the stigma around mental health is improving, there are some signs that suggest the opposite. People are twice as likely to believe that mentally ill people have violent tendencies than what was believed in 1950, suggesting that society has made negative strides — at least in some areas — when it comes to mental health acceptance. These beliefs are only reinforced by the media: in a study of newspaper articles published about mental illness in the U.S., 50% of the stories mentioned violence and 34% mentioned crime [4].

Because of these stigmas, it can be difficult for many to seek the help that they truly need, which can result in suicide.

The stigma surrounding mental health is already strong, but young men face yet another challenge: their support network is lacking. For many men, displaying emotions, expressing their feelings, or admitting that they need help are all behaviors that are widely perceived as weakness. Unfortunately, these “masculine” beliefs are strong amongst young men and can cause those who are suffering from mental illness to feel isolated, ashamed, and afraid to express their emotions to their friends and loved ones.

In a poll of 21,000 American men, researchers at the National Center for Health Statistics found that nearly 1 in 10 men experience some form of depression or anxiety, but only half of those men had sought treatment [5].

Many men are hesitant to share their depressed thoughts, and 49% of men feel more depressed than they admit to the people in their lives, according to the “State of Men 2016” report [6]. It was also found that 45% of men believed that their mental health issues could be solved without the help of others.

While everyone deserves confidentiality in their private lives, the unhealthy feelings of isolation that can stem from this belief that mental health problems must be conquered alone can be dangerous, especially with the high rates of suicide among young men. Making it even worse is the fact that younger people of both sexes don’t have the experience or the resources to empower themselves to get help without asking for it.

Many problems can lead to young people adopting unhealthy coping mechanisms, be it a death in the family, a difficult break-up, suffering from serious trauma or abuse — the list goes on.

Without proper treatment, the emotions brought on by suffering from a difficult life experience can lead to depression, PTSD, and anxiety, among other illnesses. To cope with these conditions, many will turn to unhealthy coping mechanisms, like violence and drug use, to escape their negative feelings.

This can further complicate a young man’s life, leading to legal, familial, and personal ramifications. In fact, over 70% of adolescent suicides may be complicated by drug and alcohol dependence [8]. Using potent opioids, alcohol, or other drugs can also lead to accidental deaths, such as overdoses.

Access to firearms in young people is also a cause for increased concern, as firearms are the most commonly used method of suicide for males at 51% [2].

Nearly one in five U.S. Adults live with a mental illness [7], and it’s time that we let the young men of our community know that mental illness is nothing to be ashamed of. We believe that seeking help to improve mental health should be normalized and embraced so that young men are no longer ashamed or embarrassed to pursue the help that they truly need.

We know that there’s a problem — now it’s time to provide access to solutions. There are numerous organizations, counselors, help lines, and volunteers who are ready and willing to support our community’s young people, especially those who are suffering in silence. As a community, we need to provide greater education to our young people, letting them know about the resources for help that are available.

How The River Source Can Help

At The River Source, we understand that substance abuse, mental illness, and suicide are heavily linked, highlighting the importance of effective treatment for addiction and related co-occurring disorders. We work with local organizations to spread awareness to our community about the dangers of addiction, and how we can help battle the disease.

Not only do we provide detox, residential, PHP, and IOP treatment programs, we also provide specialized treatment tracks for populations who are at greater risk for suffering from addiction and its effects.

To learn more about how The River Source is working to address this crisis in our community, reach out to Natalie Summit, Head of our First Responders Treatment Program at 855-549-3579 or by email at directors@theriversource.com.