New York is the third most populous state in the U.S. and shares an international border with Canada. New York City is the most populous city in the nation, and it accounts for 40 percent of the New York population. The city is known for its finance, fashion, big businesses, music and culture, as well as its gateway for immigration.

In fact, New York has the largest entrance into the United States for foreign visitors, with Ellis Island alone bussing in millions of immigrants. With such a high rate of foreign visitors coming into the states, there’s another factor that is affected: drug trafficking.

Although The River Source is on the opposite side of the country, New York residents are no strangers to our facility. We have worked with many patients from the East Coast who found the solitude they needed to overcome their drug addiction, remove themselves from a toxic environment and rebuild a new life under the sunny skies of Arizona.

Why Addiction is Prevalent in New York

It’s obvious why addiction is going to be more prevalent in New York compared to other states. First is the issue with immigration; New York has become home to foreign visitors from across the globe, and drug trafficking organizations can blend in easily with these groups. Second, there are nearly 18 million “customers” in this state, and drug traffickers aren’t going to pass on this potentially lucrative market. Third, there are many street gangs in New York that take over the distribution side of the drug market.

Also of interest to drug trafficking organizations is the abundance of travel in the state. New York is rich in transportation, with subways, airports and elaborate interstate systems. There are cargo ports located off the East Coast, and drugs are often smuggled in through toys, sports equipment, furniture and other plastic goods. Finally, the prevalence of financial institutions makes it easy to get drug money out of the country quickly.

How Does New York Compare to Other States?

New York has higher rates of drug use compared to other states, with approximately 9 percent of the population using illegal drugs in the past month, compared to 8 percent of the national average. New York is one of the top ten states for drug use in several categories, including cocaine and marijuana. Heroin is the most widely cited drug for treatment admissions.

Interestingly, even though drug use is higher than average, the rate of drug-induced deaths is lower than the national average. In 2007, 1,909 people died as a result of drugs, which accounts for 9.9 per 100,000 people. The national average was 12.7 per 100,000 people. The state has also been hit hard by the prescription drug problem thanks to its upscale suburban neighborhoods, which is why medical facilities are reevaluating how these drugs will be administered in hospitals and emergency centers.

Below is the percentage of the New York population using and/or abusing drugs. 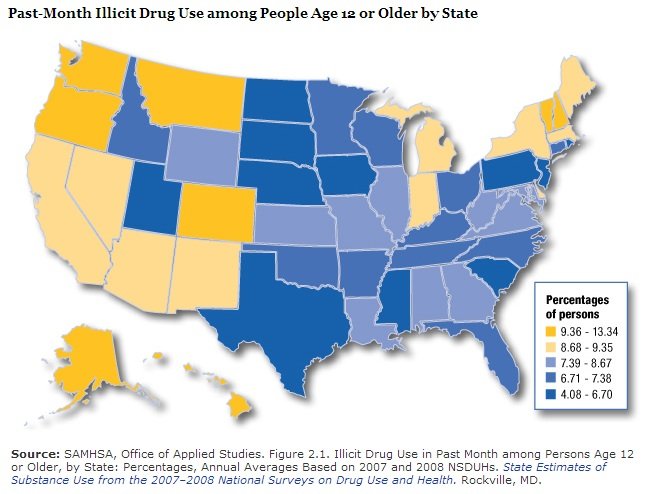 Why Seek Treatment in Arizona

It may seem complicated to seek treatment on the opposite side of the country, but for our New York patients, the decision couldn’t have been a better one. Sometimes, the best thing you can do is remove yourself from an unhealthy environment and start fresh. Our New York patients enjoy our warm, sunny weather that brings about the positive attitude and vibrant energy that is needed to overcome drug addiction. For those who will be leaving behind family, our facility accommodates family counseling sessions over the phone to keep the lines of communication open.