The Hidden Dangers of Fentanyl 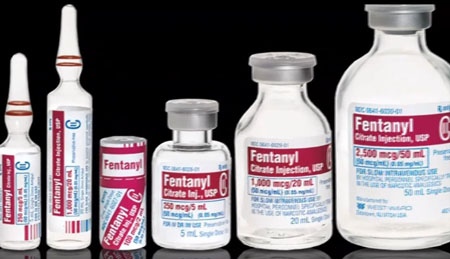 Fentanyl is one of the strongest opiate drugs on the market. It provides short-term pain relief and is often prescribed in situations where a person is already taking an opiate, but the pain breaks through the barrier. Fentanyl is also prescribed for after-surgery pain and discomfort. This pain medication produces similar effects as other opioids, and it comes in attractive options: patches, dissolving films or lollipops. The fact that fentanyl is legal and prescribed for pain gives some people the impression that experimenting with the drug is acceptable.  Fentanyl adds to the mix of problems that we as “Pill Nation” already have.

What Does Fentanyl Do to the Body?

The goal of fentanyl is to deliver strong pain relief in a slow-release fashion. It is a dangerous drug, which is why it’s less likely to be administered intravenously. The difference between a fatal dose and one used for pain relief is small, which is why this drug is highly destructive when used for recreational purposes.

When taken, fentanyl binds together the body’s opiate receptors, which are areas in the brain that control pain and emotion. When the opiate drug binds to the receptors, they increase dopamine levels that produce relaxation and euphoria. Common effects from the drug include drowsiness, lethargy, mellowness, and extreme happiness.

For the patient who is in pain, fentanyl is highly effective at treating this discomfort. But for the person who takes the drug recreationally, fentanyl poses a high risk for addiction. The opiate creates dependencies early on, so a dose that is adequate one week may not be enough the next week. Fentanyl can also lead to overdose. Overdoses should be treated immediately.

How Addictive is Fentanyl Really?

Since all opiates are reported to be highly addictive, many people don’t take the concept seriously. They feel that since these types of drugs are administered by hospitals and doctors across the country, there’s no harm in dabbling in them themselves. Unfortunately, reports of fentanyl being very addictive are not overstated. Fentanyl is a strong drug that causes dependency quickly and can lead to overdose or death.

Additionally, fentanyl is a drug that is often combined with other drugs like cocaine or heroin. Since opiates intensify the effects of drugs like these, drug users will mix them together, and some unethical laboratories will substitute fentanyl for heroin entirely. These actions have been affiliated with overdoses from heroin in the past.

It’s true that the “high” from fentanyl is less pronounced than one from heroin, but its greater potency makes it a scary contender. When used in a medical setting, the dosage is carefully monitored, as are the side effects. But when used on the streets, there’s no telling how much of the drug you’re getting or what it’s being mixed with or substituted for.

What are Some of the Undesirable Side Effects?

Opiates have desirable side effects for addicts because they create feelings of euphoria and relaxation and can amplify the effects of other drugs. That being said, there are many negative side effects that can be experienced and will be experienced if the drug is continued to be used. These include :

How Do I Know that a Loved One is Addicted?

A fentanyl addiction affects you in all aspects of life: mentally, socially and physically. Opiates alter our perception of reality and disturb our mental and emotional well being. If you notice that your loved one has a distorted view of reality or is experiencing panic attacks, personality shifts or mood disorders, addiction to fentanyl may be the problem. As addicts become consumed by the drug, their behaviors will also affect their relationships with others. Also look for signs of social withdrawal, damaged relations, and seclusion from loved ones.

On a physical level, there are many changes that occur from fentanyl addiction, some of which are noticed right away while others take time. Abusers of fentanyl will be lethargic, mellow and drowsy. They will also be euphoric when on the drug. Over time, fentanyl causes irreversible damage such as weakened immunity, gastrointestinal distress, sedation or overdose.

Addiction is scary, and fentanyl is no exception. If you or a loved one is dependent on this pain medication, it’s time to get the help that is needed. The River Source works with clients who are battling addictions to pain medication, and we continue to have success in treating these addictions using holistic, natural therapies.