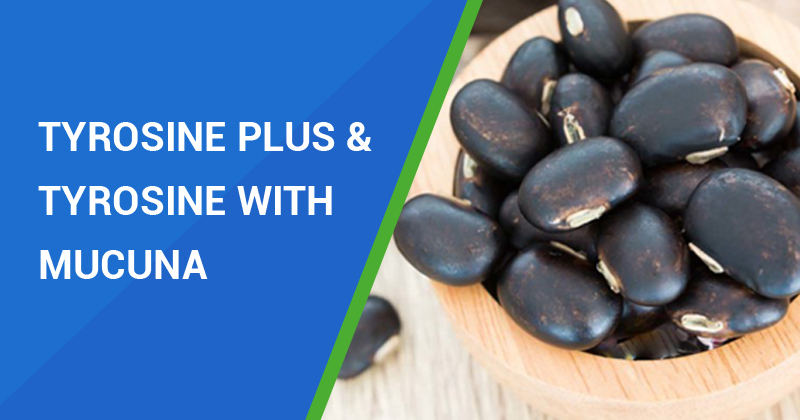 TYROSINE PLUS & TYROSINE with MUCUNA

1) Multiple Vitamin—the definition of vitamin and many minerals is “an essential co-enzyme”. Vitamins and minerals push biochemical reactions forward. As an example, Vitamin C is an essential coenzyme in the formation of all the neurotransmitters. To do amino acid therapy without a vitamin complex is akin to trying to cut a board with a circular saw that is not plugged into an electrical outlet.

2) Omega Complex—these omega fatty acids are derived from fish oil. If one has a sensitivity to fish oil the kit can be made up with flax seed oil the only herbal source of mixed omega oils. Omega 3’s and Omega 6 fatty acids have many roles in the human body/mind. There are known to have greater efficacy in treating depression than anti-depressants in general. The reason is clear—these fatty acids embed in every cellular membrane in the human body/mind. This gives the membrane integrity and stability. The idea is to return each cell, whether a skin cell or a nerve cell, back to some sense of normal functioning. If we can regenerate normal cellular membrane function the patient will return to some sense of normal functioning.

3) Tyrosine Plus and Tyrosine with Mucuna…

a) The minerals and vitamins listed are either essential co-enzymes or co-factors needed to push the reaction forward to optimize the performance of the neurochemical pathways. For example—Calcium is not a co-enzyme—it is a co-factor…the release and re-absorption of the neurotransmitter are calcium-dependent.

b) 5-hydroxytryptophan (5-HTP) is the amino acid necessary for the production of serotonin and melatonin. Serotonin is essential in healthy gut function and cardiovascular function. It is also the neurotransmitter that allows for balanced mental health.

d) Mucuna ( in the Tyrosine with Mucuna formula only), bypasses the rate limited reaction that limits the tyrosine to L-dopa reaction—this allows for a more dramatic boost in production of dopamine (the feel-good neurotransmitter), and also the increase in production of norepinephrine and epinephrine which are critical for the healthy reactions to stress.

e) Methionine is the amino acid that converts directly to S-Adenosyl methionine—or SAM-e which is a critical co-enzyme necessary for the conversion of dopamine to norepinephrine.

f) Glutamine is the amino acid that converts to GABA. GABA is the primary inhibitory neurotransmitter which keeps the stimulatory neurotransmitters in check. In fact, GABA receptors are where anti-anxiety medications (such as valium, etc) work. Glutamine also helps to keep gut cells healthy so that absorption of nutrients is maximized.

4) Adrenal support capsule—almost all patients that need the Tyrosine with Mucuna formula are adrenal fatigued…this cap supports adrenal function until the systems are normalized. Not in phase two formulas.

David Arneson was born on September 22, 1949, in Sidney, Montana. He graduated from Philomath High School in Philomath, Oregon in 1967. He entered the U. S. Army in 1968 and was honorably discharged in 1970. After his Army service, he went to Oregon State University for one year where he majored in Liberal Studies. In 1971 he moved to El Paso and worked for several years in the customer service industry. In 1976 he started his own contracting business to which he sold a majority interest in 1992 and the remaining limited interest in 1996. In 1988 he took the opportunity to return to school and entered the University of Texas at El Paso where he received his Bachelor of Science degree in 1992 with a double major in Biology and Psychology, graduating with Honors. From 1994 to 1996, he continued his education at the University of Texas at El Paso and the El Paso Community College. In 1994 he received the necessary training to be certified by the American Board of Hypnotherapy in clinical and regression hypnotherapy. In 1996 he entered into his medical training at the Southwest College of Naturopathic Medicine where he received his Doctorate in Naturopathic Medicine in August 2000. From 1988, he has worked in both the volunteer and employee capacity in the field of addiction, as well as with the seriously mentally ill, working extensively with both adult and adolescent populations. Since October of 2000, to July 2002, he served in the capacity of Clinical/Medical Director at the Naturopathic Detox Program, a non-profit 14-28 day residential naturopathic drug and alcohol detoxification facility. Presently, he is Medical Director of The River Source Naturopathic Detox and Treatment Program in Mesa, Arizona. He is currently a part-time Clinical Instructor of Naturopathic Medicine at the Southwest College of Naturopathic Medicine and Health Sciences where he supervises and trains student doctors in clinical settings. He also maintains a private practice, focusing on the treatment of alcoholism, drug dependency, and chronic disease.