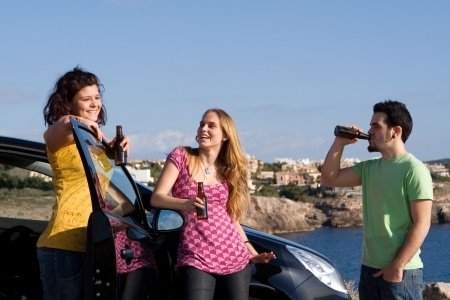 Why Underage Drinking Needs to be Taken Seriously

Thankfully, most parents are not thrown into the role of raising teenagers. It’s a gradual job that starts with diapers and late night feedings and progresses over the years. It’s been said that there are two types of parents up at night: the parents of newborns and the parents of teens. The only difference is that the parents of teens don’t have their children with them or in their control. Their teens may be going out with friends, staying out past curfew or engaging in risky behaviors.

What most parents worry about at some time in the preteen and teen years is alcohol. Alcohol is legal and readily available, especially for teens with lax parents or older siblings. When the curiosity kicks in, alcohol is usually one of the first things that kids experiment with. By the time they reach 8th grade, nearly 50% of adolescents have had at least one drink, and 20% report having been drunk.

It’s not just the number of adolescents who have experimented with alcohol that is alarming but the ages that kids are starting to drink. The average girl has her first drink at 13; it’s 11 for a  boy. Underage drinking is a widespread problem, and it extends beyond the actual consumption of alcohol. Kids who drink early are more likely to be involved in violent behaviors, attempt suicide, engage in unprotected sex and develop alcohol problems later in life.

Car accidents are the leading cause of death among adolescents 15 to 20. They are already at an increased risk for accidents because of their inexperience with driving, and the rate of fatal alcohol-related crashes among 16 to 20-year-olds is more than twice that for drivers 21 and older.

Mental illness typically surfaces during the teen years, and this alone can increase the risk of suicide. When teens add alcohol to the mix, it makes it even harder to deal with depression or anxiety. In one study, 37% of 8th-grade females who drank heavily reported attempting suicide compared to 11% in those who did not drink. Suicide is the third leading cause of death in youth ages 14 to 25.

Sexual assault most commonly occurs among women in late adolescence and young adulthood. Alcohol fuels this type of behavior, as it brings out more aggressive tendencies in males and more submissive tendencies in females. Unfortunately, when alcohol is involved in sexual assault cases, victims of the assault won’t report what happened or may not be taken seriously.

Even if a young girl is not a victim of sexual assault, she is at risk for sexually transmitted diseases, unwanted pregnancy, and multiple sex partners when under the influence of alcohol. Alcohol use and high-risk sex are closely related. Binge drinking leads to impaired thinking and more risky behavior, which raises the risk of unwanted and unprotected sex.

Early alcohol use can have long-lasting consequences. People who start drinking before the age of 15 are four times more likely to develop alcohol dependency than those who didn’t have their first drink until they were 20 or older.

It’s common for personality disorders to develop in early adolescence. Some teens start developing severe anxiety or depressed moods, and they’re not sure why. With the need to conform to peer standards, teens are sometimes driven into the world of controlled substances in order to feel cool, grown up and in control. Unfortunately, when alcohol starts being used, it’s difficult to tell what’s going on. If the underlying problem is overshadowed, it will be left untreated.

Underage Drinking Should Not be Acceptable

Early alcohol use is a widespread problem in the U.S., but not enough people take it seriously. Because alcohol is socially acceptable and legal, it has a more innocent image. Some people feel that every teen experiments with alcohol at some point and that this behavior is a normal part of growing up.

Unfortunately, underage drinking has serious consequences and puts teens directly into the line of danger. Just as you wouldn’t allow a 2 year to know when to cross a busy road, you can’t expect a teen to know how to handle the responsibilities of driving and drinking, understanding depression or knowing how to have safe sex.

Intervention programs and treatment centers are trying to change the thinking that alcohol consumption is okay in youth. The message that should be reinforced is that drinking before 21 is NOT acceptable Additionally, underage drinking IS illegal, and it’s illegal for a reason. Teens are not prepared to take on the responsibility that comes with responsible drinking. Therefore, parents should not allow this behavior, even if the comfort and privacy of their home.

Intervention programs are also intended to increase self-confidence, self-awareness, and self-motivation in teens. The belief is that with more awareness and encouragement, teens will take responsibility for their health and make smart, healthy choices. This is the best approach that parents can take as well. The more we are honest about teens regarding the severity of underage drinking, the more we can make a difference and delay early alcohol use.